Twenty-eight years ago I met Myrna, a most wonderful young woman and after five years together we started a family and decided to plan a wedding.  People think that I chose February 15 because that is the day chocolates and flowers go on sale, or so I would always remember at least the day before but we were married February 15  because it was the anniversary of her grandparent’s and my parent’s.  We wanted all our friends present but it was a second marriage and we did not want to tell anyone, as we did not need gifts. Being a little creative I wrote a murder mystery play for 44 people giving them a description of their character and lines they were to dress the part and drop for clues to others.  We rented the local theater and invited them all to a party and what would be a surprise wedding to everyone.

Two friends, who were actors agreed to the lead roles unaware of what we had planned and we knew they would carry the show.  One friend had a heart attack that day (still healthy 25 years later) so he and his wife could not attend.  Another was in Montreal that day but his wife attended and a third couple was to be on the way to Mexico.  We had stood up for the third couple and when they called to apologize, he guessed what was going on and gave away their trip to someone else then showed up with the other 40 people all dressed in character.

I was dressed formally as the butler greeting everyone and explained that Myrna was delayed but would be there soon.  The play started and a few minutes in the main actor was poisoned in our mist.  He was removed and would return later as the detective leading to the discovery of the murderer. In the mean time flowers and a small organ brought in to change the scene to one of a church supposedly for the funeral.  Many people were amazed I would cast a local minister to come in robes playing a minister but they shrugged it off.

A good friend and professional photographer, was cast as one with all her equipment to take photos of the party.  She was given a note that read, you are now a wedding photographer begin taking wedding pictures. Fred Tissington, now retired to Kelowna as well, had been cast as a CNN reporter with video camera and he was given a similar note.  A third note went to a dear friend, which read go to the organ and play the wedding march.  She said even as she played it she was trying to figure out how that fit into the play.

At that moment Myrna walked in with our parents and the crowd went quiet. Our one tough lawyer, now a judge had to wipe tears from his eyes, as did many of our other friends.  We had pulled it off!  The couple that had guessed and flown in were invited to join us at the front and we were married.

After the ceremony Myrna and I brought out Costco lasagna and served it ourselves, after which we returned to figuring out who did the deed.  The culprit turned out to be Buzz Howie who also retired to Kelowna a few years ago.

Wedding day photo with Myrna, Carson and I 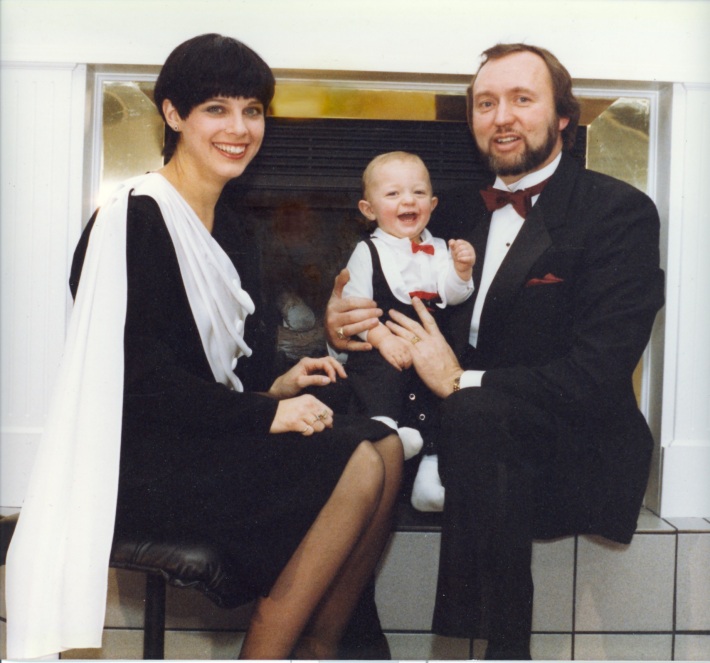 3 thoughts on “Murder or Marriage”