I’m sure Chuck Norris would not be afraid to donate but I never gave any thought about it until about a year ago when my brother-in-law, Wayne, lost the function o of both kidneys. Wayne was working on a job when he scratched his arm and the doctor put him on some drugs to fight any infection. The drugs altered his immune system and that shut down his kidneys.

Being an independent contractor he was not covered by compensation and did not have insurance to cover his loss of income. Going to dialysis three days a week was not only uncomfortable and inconvenient it cut deeply into his ability to keep earning a living. He had to keep working and get back up to speed as quickly as possible.

When the word went out for donors the wife, stepped up instantly as did their younger sister and the journey began.

This article is not just to document the journey but to shed light on the challenges and rewards in hope that others will see it as an option for them to step up and save someone else in need. When I brag about how brave and generous my wife is she simply says she feels privileged to give such an important gift and she would prefer I did not blog or brag about her story but it is not so much her story as a personal story of triumph over one of life’s hurdles.

Give Until It Hurts! 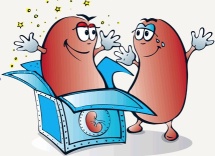 If you came across a person trapped in a burning car would you try to save them? Or perhaps you saw someone fall out of the boat or an old person being attacked by a small angry dog would you risk your safety to aid them?

What if you knew the person or what if you had a close relationship with that person, would it change your answer?

When my wife Myrna discovered her brother was in need of a kidney she did not hesitate to volunteer. She assumed she would be the closest match because they were so similar in many ways she was surprised when she was only a 50% match and her sister was a 100%. She was not only disappointed but said, “I thought I would win!”

“Win?” That best describes her attitude about life, it is how can we win at the challenges we face. Later when her sister could not donate Myrna stepped up to take her place. When the doctor discovered complications and told her it increased her chance of risk by 300% she did not hesitate and insisted on continuing. Since this adventure began we have met a lot of great people who have donated or received kidneys and they all say it was great experience.

Finding donors is a problem because too many of us refuse to donate or think about it until we disqualify ourselves, mostly out of fear and I understand that but why do we not sign donor cards so organs will be automatically taken if we suddenly meet an early end? Laziness in most cases, when you only had to sign your driver’s license I did so right away but now I am not sure if I am still registered or how to even sign up. In Spain they have had an opt-out program for some time, which supplies all the parts they need, and Scotland and Wales are considering the same and now Nova Scotia is entertaining legislation as well. Why is that not a standard in Canada? I am thinking of a bumper sticker in support that says “Take my organs just leave my guitar alone!”

This is how Opt-out works. If you want to donate or don’t care if they harvest parts after your demise you do nothing. If you are opposed to donate for religious or any reason you simply register as opting out of the program. People who are really opposed will be motivated to sign up otherwise we are all in. This saves someone from having to approach a family at a devastating time to ask for permission to take organs to save someone else’s life.

Today I am sitting in the waiting room, the day of Myrna’s first operation and before we left her brother’s place she told him, “I am doing this because it is a privilege to do this for you. Not because I feel obligated or pressured but because I can give you this remarkable gift and I feel so good about being able to do so.” I told a nurse what she said and the nurse replied, “What a Christian thing to do.”

Myrna is not Christian and she did not do this for any religious reason, or promise of some future heavenly reward, she did it because she could. This is the greatest pay it forward gift.

Yesterday we met a woman whose nephew needs a kidney and his brother discovered six months ago that he is a perfect match so he is thinking about it. Both are in their early thirties, good health and close, so what is there to think about? Do the people who run into burning buildings to save a child stop to think about it? I later relayed this story to my brother-in-law and he surprised me by saying I shouldn’t be so judgmental.   He said this is an important decision for anyone to make and he would never hold it against anyone for not donating. He said even if my wife wanted to back out now he would understand. The way the system works both the donor and recipient have their own doctors and they do not talk. The key to the program is the donor must not be harmed in any way and they even told my wife that if she felt she wanted out at any time she just had to say so and they would tell the other team there was a medical problem that prevented her from proceeding. Wayne said he understood that but is a straight forward kind of guy and said he would sooner she be honest with him so he didn’t then worry about what health problems she might have. At this point however there is not much that can stop her.

Watch for follow-up chapters in this adventure!